All political power is unitary. It is one of the great lessons for thinking about politics. You are always in the process of adding to it or diminishing it. Assert power and sustain it and you gain power. Fail to do so and a politician grows weaker. This is why the concept of expending ‘political capital’ is mostly nonsense.

We have seen this unfolding before us over the last month. President Trump now daily asserts power he cannot sustain. ‘Law and Order’ street fighting confrontations using the US military, Bolton’s book, bungled DOJ purges, a humiliating Tulsa venture. Each gambit newly exposes his deteriorating power and thus hastens the process, emboldening others to oppose or resist him.

More Complicated Than It Looks

An anonymous DOJ vet shares some key details about Geoff Berman’s unique legal status as US Attorney in the Southern District of New York.

Many others weighing in about the SDNY fiasco, but I’m not seeing this point, which is worth considering.

Even if Trump can ultimately dislodge Berman (under 28 USC 541 he, though not Barr, can likely fire him), he can’t pick the temporary replacement. Until the Senate confirms someone, that choice plainly belongs exclusively to the SDNY judges under 18 USC 846. If Trump tries to ignore that and install his own pick anyway he faces two problems he can’t easily overcome. First, there would be a staff revolt. Second, every criminal defendant indicted under the bogus US Attorney would have standing to seek dismissal because the indictment was not authorized or signed by the lawful US Attorney — and those motions would be decided by the same SDNY judges whose authority Trump is trying to usurp.

A Remarkable Turn of Events

A remarkable turn of events last night unfolding in New York City and Washington, DC. As you see in the headline, Bill Barr attempted a Friday Night purge of the Manhattan US Attorney’s office but it seems not to have gone according to plan. (This in itself is evidence of Trump’s ebbing power.) Barr announced that Geoff Berman, the US Attorney in the Southern District of New York, had “resigned” “effective immediately” and was being replaced on a temporary basis by the next door US Attorney for the District of New Jersey, Craig Carpenito. Barr further announced that President Trump would be nominating Jay Clayton, currently the Chairman of the SEC, to become the next US Attorney. There are a million things off about this; scheduling it on an exhausted Friday evening just puts a seal on that reality. But when I left off early yesterday evening I had at least assumed that Barr and Trump had made sure that Berman was going along with this or going quietly.

That turned out not to be true.

Looking at the Numbers

Yesterday was the first day in the history of the COVID epidemic when the percentage of positive tests returned in New York State fell below 1%. You can see the trend here. Red is New York State and blue is the rest of the United States excluding New York State. 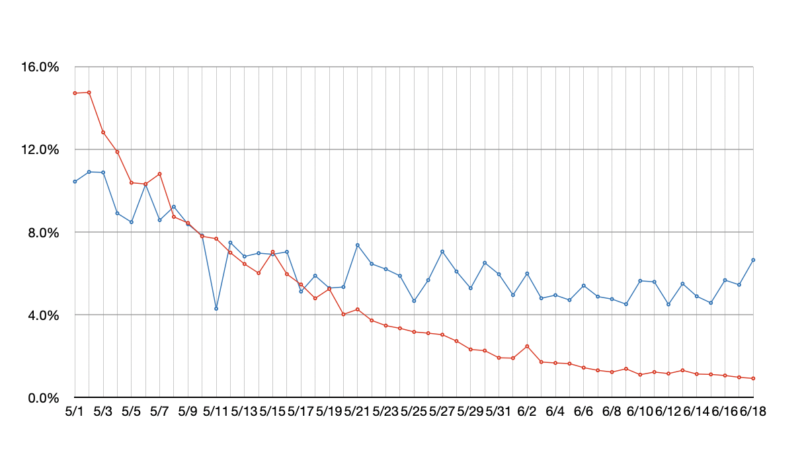 Wait. Stop. This is Super Important.

If you’re a Prime member we have a great no-risk offer we’re rolling out today to celebrate signing up our 33,000th member – which happened just a few minutes ago. If you’re already a Prime member we’ll let you try out two weeks of Prime AF (Ad Free) for no cost and zero obligation. Simple as that.

Upgrading to Prime AF is also a great way to support TPM, as I describe below. So even if you’re not sure it’s for you it would mean so much to us if you’d give this free trial a try.

I have spent a lot of time analyzing the New York COVID epidemic both because it was the center of the storm in the United States and because it affects me, my loved ones and coworkers so directly. The graphed shapes of the New York outbreak and the nationwide outbreak are quite different. The former rockets upward and falls down again at a slower but still comparable arc. Nationwide it’s quite different. The numbers rocket upward and then basically plateau. It’s not a proper comparison. The epicenter of an outbreak has different dynamics than the more rolling spread of contagion in less hard hit areas. This is why the proper comparison is not New York vs the United States or the United States versus any European country, all of which are dramatically smaller than the US, both in geography and population. The proper comparison is the United States (~330 million) vs the EU (~440 million). This brings together hotspots and peripheries, urban and rural and all the mix of population densities into one. As you can see here the progress has been very different and not at all good for the control of the epidemic in the United States. Another bizarre incident in the evolving story of New York and its relationship with the NYPD. Last night three NYPD officers went to a Shake Shack in Lower Manhattan, got shakes and then became ill after drinking the shakes. They either went to or were taken to the hospital, treated and then released. This quickly led to suspicion that the officers had been intentionally poisoned by one or more Shake Shack employees as part of the purported left-wing, Antifa, civilian “war” on the NYPD. An investigation was commenced. But before anything was established the NYPD’s police unions went into overdrive accusing one or more Shake Shack employees of attempting to assassinate the officers.

A chaotic scene unfolds in Albuquerque. A crowd of protestors who were intent on pulling down a statue of one of conquistador founders of New Mexico were met by a group from a far right militia which goes by the name ‘New Mexico Civil Guard.’ Precise chain of events is unclear. But one militia member opened fire and hit one protestor. The militia members have been taken into custody by police who arrived on the scene. The condition of the shooting victim is unknown.

Way, way back on March 11th, I wrote that we appeared to be entering onto a months’ long period of COVID whack-a-mole: a new normal across the country, an outbreak in this city or region followed by a lockdown until the spread abates, with the cycle repeated over and over indefinitely over time until science and medical research come to the rescue. The reality turned out quite different. The New York City metro was on the cusp of catastrophe. Four days later the state would report its first three fatalities. Just under one month after that post the daily statewide death toll would peak at 799. What slowly became clear was that New York wasn’t the first to be hit. It was a unique and devastating scale of outbreak for the whole United States, indeed on par with the worst in the world.

Today we finally seem to be in the midst of that whack-a-mole model we discussed three months ago. For the moment at least New York seems to be one of the most COVID-controlled regions in the country. The state has more than double the rate of national testing and the percentage of positive tests has been consistently under 2% since the beginning of June. Meanwhile cases are growing steadily across the South and in much of the West.

I love this story. It’s an amazing story, which is part of the suburban Antifa invasion genre but takes it in an interesting and novel direction. We start in Columbus, Ohio, another city with BLM protests and what is probably best described as an old school hippie bus with all the flowery freeform murals and the like. It’s the home of a group of street circus performers who do something called Flow Art which the paper calls “an umbrella term for a type of street performance that usually involves juggling and spinning flaming objects.” I just learned about Flow Art. Maybe you already know about it. The troupe call their bus Buttercup. Fair enough. The bus is co-owned by Marisa “Reese” Digati and her partner, Jonathan “Bearpaw” Crane. They live in the bus.