Trump: "No I don't take responsibility at all." pic.twitter.com/iT3Fj2JT6T

New York state and city officials have been pressing the FDA for days to sign off both on new tests but also automated testing. They seem to have finally gotten the authorization today. They’ve also gotten the sign-off to have the state approve testing additional capacity within the state. I know I’m focusing a lot on New York. It’s a location of major spread. But I’m also doing so because the issues are relevant to and often paralleled by the same things happening in states around the country.

This Should Focus Our Attention on the Vulnerable (News From Italy)

We’re getting our first breakdown of mortality figures from the COVID-19 outbreak in Italy. They should focus our attention on protecting and isolating the vulnerable. Helen Branswell, a reporter for StatNews who has been a critical source of information through this crisis, is sharing information from a teleconference briefing hosted by JAMA. It’s with a top clinician in Lombardy. One slide gives a breakdown of the epidemic by age.

Your first post about closing the TPM offices prompted me to start putting similar pressure on my own colleagues. The news may be bursting with closings and cancellations, but I fear there are as many businesses like mine — a [xxxxxxxx] agency with ~120 employees and four office locations around the country—who even now are still playing catch-up to the reality of this situation.

*** A few moments ago the Director General of the WHO said that “Europe has now become the epicenter of the #COVID19 pandemic, with more reported cases and deaths than the rest of the world combined, apart from China. More cases are now being reported every day than were reported in at the height of its epidemic.” In one sense we know this. New infections in China have dropped to a very low level. But he seems also to be saying that velocity of the epidemic is now greater in Europe than it was at the height of the crisis in China.

*** There has been a lot of attention to a statement yesterday from Ohio’s Department of Public Health Diretor Amy Acton who said that: “We know that 1% of the state’s population is carrying this virus today. That’s over 100,000 people.” I have seen this claim discussed by a substantial number of epidemiologists, public health officials and data modelers. Each expressed real skepticism about this estimate and indeed what the basis for the estimate was. As of yesterday, Ohio appeared to have run 87 tests and found 5 infections while 52 test results were pending. To be clear, I am not saying this number is false. I will also say that public health officials expect a substantial percentage of the country to become infected with the virus eventually. So this is not a ‘calm down’ message. It is simply that many experts seem skeptical that that number is accurate today and question what evidence the estimate is based on.

Thank You and Send Us Your Insights

You’ve been sending us some very kind and generous notes about the work our team is doing providing information under these trying and unprecedented circumstances. We thank you for that. I would like to thank our whole team myself for work in circumstances few if any of us have experienced before. As I noted on February 28th – which now seems like half a lifetime ago – we will focus much of our effort on leveraging our journalistic experience finding, analyzing and amplifying trustworthy sources of information on the crisis. Our team is also focusing on reporting in areas of governmental action, agencies and policy decision-making where we bring great pre-existing experience to the table.

Let me remind you to keep the emails coming.

Progression of New Testing By Day

Testing in the United States remains drastically behind testing in other countries, even before figuring in the scale of US population with dwarfs all but a few countries in the world. But it is ramping up. Here is a quick and dirty chart I just compiled with the data from the COVID-19 Tracking Project. This is the cumulative number of the number of people tested in the United States as updated each day. 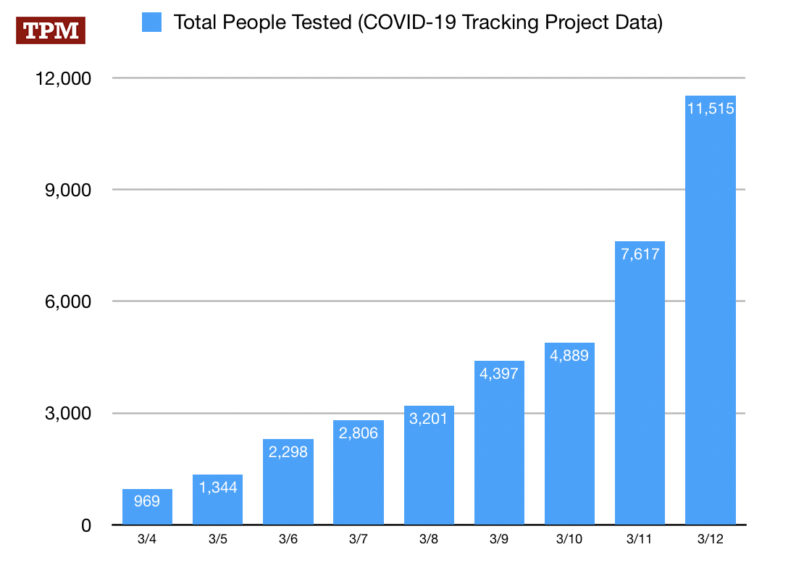 (Click the chart to get a zoomed in version of the image for easier reading.)

Let's Talk about the Schools

Let me mention an important public debate unfolding across the country: school closings. I know this debate in New York City because I’m a resident and I have children in the public schools. We have a particular issue here because we have active spread in the city and a nearby suburb (New Rochelle) is one of the biggest hotspots around the country. Still, the basic question applies in most parts and perhaps every part of the country. I’ve gradually and very reluctantly come to the conclusion that the city government and Board of Education are making a mistake in how they’re approaching the issue.

Let me try to explain carefully why I think that’s the case. And let me be clear that I’m speaking as a resident and a parent and applying my journalistic skills but in no way an expert in public health or medicine.

The President’s usual nonsense has graver implications during a pandemic crisis. Here he is from a few moments ago claiming that all people returning from Europe are being tested for Coronavirus and being quarantined if they are positive. Obviously this is completely false. To the best of my knowledge people are not even being questioned or having their temperatures taken, let alone being tested. The country doesn’t have remotely the testing capacity to do that even if we wanted to.

Trump claims (falsely) all Americans returning to country are being tested:"We have heavily tested. If an American coming back or anybody coming back, we have a tremendous testing set up where people coming in have to be tested … if it shows positive … We have to quarantine." pic.twitter.com/ndGlKmSFJh

You have to find good news where you can at the moment.

There is at least good evidence that testing is starting to pick up. Terribly, terribly below where it needs to be, but here are some numbers. According to imperfect but best available statistics, by March 10th 4,889 people had been tested. By yesterday it was 7,617. As of this morning it’s 8,900. It seems likely to go well over 10,000 today.